A company that made credit cards was having issues in their print quality, and static was the culprit.  They used PVC sheets as a base material to print on, and like with any non-conductive materials, static can be generated easily and create problems.  For this company, static was attracting dirt to the surface of the material, causing blemishes in the print.  They contacted EXAIR to find a solution.

When non-conductive materials slide, hit, peel, and rub; electrons from the surface can move from one atom to another; thus, creating static.  The type of material and the amount of movement governs the amount of static forces.  These strong static forces can attack debris and fibers, as well as generate shocks, misalignment, and machine jamming.  Another feature of static is that it can regenerate if the materials continue to slide, hit, peel, and rub.

For the company above, they were printing on 30 cm by 48 cm (12” X 19”) PVC sheets.  They used three different processes to print a complete credit card; silkscreen, digital, and offset.  After each printing process, they would lose sections of the sheet due to poor image quality.  At the end, they were losing between 20 to 30% in visual rejections.

For this application, we had to do two operations; remove the static and clean the surface from debris.  The Gen4 Super Ion Air Knife can do both of these operations at the same time.  With the laminar air stream that comes from the Super Air Knife, it can carry both positive and negative ions from the attached Gen4 Ionizing Bar.  Together, they can remove any type of static charge as well as becoming a very effective tool as a non-contact wiper to remove debris.  With this ability, the print quality would not be affected during cleaning.  Since static is a surface phenomenon, I recommended to also remove the static from the other side of the sheets.  We did not want to have any dirt or debris that could be remaining on the bottom surface to transfer from one surface to the next during stacking.  This could scrape the finish during loading and unloading of the sheets. 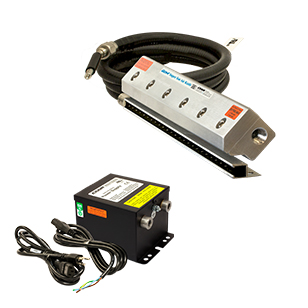 I recommended two pieces of a model 112012 Gen4 Super Ion Air Knives that are manufactured to 12” (30 cm) in length.  This customer can easily mount one above the sheet and one below the sheet prior to printing.  To operate the attached Gen4 Ionizing Bar, EXAIR offers two types of power supplies, a two-output unit, model 7960, and a four-output unit, model 7961.  They can save you money when needing multiple Static Eliminators to operate in your system.  With a model 7960 Gen4 Power Supply, they now had a system to remove static and clean the sheets.  Once they installed the Gen4 Super Ion Air Knives onto their system, the rejection rate dropped to near zero.

Rejected parts are costly, wasteful, and reduce production rates.  If you have rejection from static problems in your system, EXAIR has a large line of Static Eliminators to help you.  You can contact an Application Engineer to review your application.  For the customer above, the Gen4 Super Ion Air Knives made it possible to generate more credit cards per sheet. 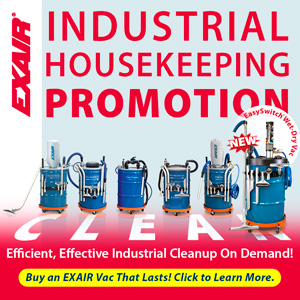