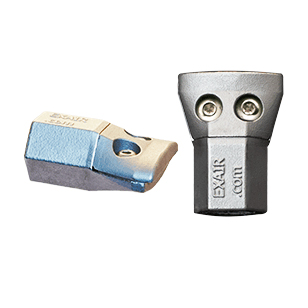 A casting company used a die casting process to make large aluminum panels. In their operation, a two-part die would clamp together and be filled with hot liquid aluminum. Once the panel was formed and cooled, the die would open to release the part. Before the next panel was die casted, they would use a home-made cart to cool and clean the dies. The cooling was done first by spraying water onto the surface, then compressed air was used to dry the dies. When they started to use their home-made cart in their process, they noticed that the air pressure would begin to drop in their facility. Other locations in the plant started having problems with their pneumatic equipment.   They were using too much compressed air during the drying period; so, they contacted EXAIR to see if we could help reduce the amount of compressed air to dry the dies.

To explain a little more about the home-made cart, it was made from a 1” square piece of tubing that was bent in a U-shape. The dimension of the cart was about 40” long and 24” high. Across the top was a piece of extruded aluminum spanning the two ends of the U-shape tubing. This portion of the cart would supply the water to the liquid nozzles. The liquid nozzles hung vertically down from the extruded aluminum at designated heights to target certain areas of the dies. The U-shaped square tubing was used to supply the compressed air to the blow-off nozzles. The compressed air inlets were welded onto each end of the 1” square tubing. Across the bottom of the cart, the 1” square tubing had 38 holes that were drilled and tapped to 1/8” NPT (19 tapped holes on each side). The blow-off nozzles were 1/8” pipes with the ends smashed (reference picture below). They were made to different lengths to get as close to the die for maximum blowing force. The entire home-made assembly was attached to a robotic fixture with a cam to move the large cart between the dies. In applications using “smashed” pipes, they are very easy and inexpensive to make. But, as this customer found out, they use way too much compressed air and they are not as effective in blowing-off or drying.

The customer above was limited to modifications to the home-made cart. It was already configured with the robot features and cam to hit the targeted areas. So, I recommended the model HP1126, 1” High Power Flat Super Air Nozzle. It has a 1” wide air stream that is very similar to the flow pattern of the 1/8” smashed pipe. But unlike the smashed pipe design, the model HP1126 nozzle can accomplish so much more. One of the biggest differences is that the EXAIR nozzles use much less compressed air. (The initial reason for contacting EXAIR). With the engineered design of the nozzle, it can entrain large amounts of ambient air which means that less compressed air is required. For a 1/8” NPT smashed pipe, it can use close to 70 SCFM of air at 80 PSIG – each!

The model HP1126 only requires 17.5 SCFM at 80 PSIG. That is a difference of 52.5 SCFM per nozzle. With 38 nozzles being used on this home-made cart, that equates to a total savings of 1,995 SCFM of compressed air. By simply replacing the 1/8” smashed pipe to a model HP1126 with a shorter nipple, their facility was able to save much compressed air and maintain the pneumatic requirements in the other work areas.

The customer was extremely happy with the air savings, but they asked about the amount of force that the model HP1126 can supply. It was important in their process to remove any residual water from the dies. The reason for the blow-off pipes to be so close to the die was to try and increase the blowing force. The best way that I could explain to them was by using an example of a garden hose. (Reference a blog by Neal Raker “Sometimes Back Pressure is Good; Sometimes it is Bad“).  The garden hose is attached to a spigot outside your house. As you open the spigot to supply water through the hose, the water will flow out of the hose at a slow velocity; not very strong. When you place your thumb partially over the end of a garden hose, you restrict the flow and increase the force. Now, you can reach the second-floor windows of your house to clean. With a lack of restriction at the end of the pipes, the air pressure will drop quickly as it travels through the long square tube and through the 1/8” pipe extensions. By the time the compressed air reaches the blow-off site, the pressure is much lower; thus, reducing the effectiveness of removing the water.

The EXAIR nozzles work like your thumb on the hose. The usable pressure is increased at the HP1126 nozzle, instead of a point much further upstream. By increasing the pressure at the point-of-use, the effective velocity and force is much stronger. In addition to this, they can now move the nozzles away from the die surface; in case of any “hiccups” in moving the cart in and out of the dies and eliminating any marring of the surfaces.

Once they installed the 38 pieces of the model HP1126 nozzles onto their cart, the first thing that they noticed was the amount of noise reduction. The model HP1126 only has a noise level of 82 dBA at 80 PSIG, compared to a noise level of an open pipe which is over 100 dBA. By replacing the flattened nozzles with the EXAIR nozzles, this company was able to…
1. reduce air consumption
2. keep the other areas of the plant operating by conserving compressed air at this location
3. reduce the noise level and
4. increase the effective blowing force

If you find that by using your blow-off/drying system, your pneumatic machines under-perform, or the low-pressure alarms are triggered, or you have to turn on an auxiliary compressor, you should contact an Application Engineer at EXAIR to see if we can optimize your compressed air devices. These EXAIR engineered nozzles can remove many issues in your system as it did with the casting company above.