The lower relative humidity associated with the cold, dry air of winter results in a significant increase in customers  with problems related to static. Luckily, EXAIR has a wide-range of Static Eliminators that are designed specifically to address static issues in a wide variety of industries. So, what exactly is static and how is it generated? Let’s take a quick trip down memory lane to elementary school science class….

An atom consists of three basic particles: protons, neutrons, and electrons. The protons (positively charged) and neutrons (neutral charge) form the nucleus. Outside of the nucleus, electrons (negatively charged) are quickly zipping around in orbits at specific distances from the nucleus. These electrons are bound to the nucleus due to electromagnetic force. Opposite charges attract. Since the protons in the nucleus carry a positive charge this acts on the negative charge of the electrons and keeps them in orbit. The closer the electron to the nucleus, the stronger the bond and the more energy required to break that electron from its original orbit.

When an atom gains or loses an electron, it affects the balance that occurs within an atom. If an atom gains an electron, it now has more electrons than protons. This results in a negatively charged atom. The opposite can be said if an atom loses an electron, it now carries a positive charge. This charge imbalance is where static electricity comes from. Both positive and negative charges will remain static until contacted by or in close proximity to a conductive or grounded surface. Materials such as paper, plastic, or textiles will normally contain an equal number of both positive and negative ions. When subjected to friction, this balance can be disturbed if the atoms gain or lose an electron.

The static charge will then exert a force on nearby charged objects or grounded conductors (including personnel). These issues can also manifest in the form of dust clinging to product, product clinging to itself, rollers, machine beds or frames, materials jamming, and sheet feeding problems.

To eliminate these charges, EXAIR’s Static Eliminators produce an equal amount of both positive and negatively charged ions. This allows us to neutralize either charge quickly and effectively.

For applications that allow you to install close (generally within 2”) to the surface of the material, we offer our Ionizing Bar in lengths ranging from 3”-108”. If a wide area of coverage is necessary, but you can’t get close to it, the same Ionizing Bar is installed on the Super Ion Air Knife to help deliver those ions over a greater distance.

The Ionizing Point is another product that can be used without the need for compressed air. A compact, single point ionizer, this product is ideal for winding, rewinding or slitting operations. It can also be mounted through a duct to neutralize static charges due to moving air or materials.

The Ion Air Gun combines incredibly fast static decay rates with low compressed air consumption. With a 10’ flexible armored cable and ergonomic handle, the Ion Air Gun is best for applications where an operator will perform the blowoff process. 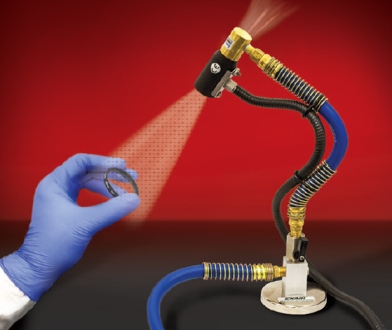 The Ion Air Cannon delivers a quit, efficient, and concentrated flow of ionized air. It is ideal for hard to reach spaces or confined areas that necessitate a solution to static problems. Designed with a sturdy stand, the pre-drilled holes can be wall, bench, or machine mounted. It incorporates a swivel adjustment for directing the airflow.

Our Gen4 Static Eliminators have all undergone independent laboratory tests to certify that they meet the rigorous safety, health, and environmental standards of the USA, European Union and Canada that are required to attain the CE and UL marks. If there’s a process in your facility that could benefit from a solution to static problems, please give us a call. Any of our Application Engineers will be happy to help select the best option for your process.