Over the weekend, here in the United States we celebrated Independence Day where we declared ourselves as an independent nation, no longer under the rule of Great Britain. Amid all of the celebration there was another event taking place that captured the attention of our great nation – the United States women’s national soccer team (USWNT) was set to compete in the championship game of the 2015 FIFA Women’s World Cup on Sunday.

The USWNT last captured the cup back in 1999 in dramatic fashion by winning 5-4 on a penalty shootout. They also made the final game in the last Women’s World Cup back in 2011 but this time they were unable to duplicate their earlier success and ended up conceding the championship match on a penalty shootout to the Japanese women’s team.

Fast forward to this year, where the USWNT was the odds-on favorite to win based on a balanced roster featuring several veteran players with previous World Cup experience and what some consider the sport’s greatest goalie. They had a few scares along the way, but ultimately were able to advance to the championship game where they matched against a familiar foe – The Japanese national team.

Already fueled by the bittersweet taste in their mouth from the 2011 defeat to the same team, the USWNT came out on fire and scored their first goal in the first 3 minutes followed by their 2nd and 3rd goal, all by the same player, by the time the game clock reached 16 minutes. Needless to say, the team was well on their way to avenging their previous loss and eventually winning the tournament by a 5-2 final score with bragging rights as the best women’s soccer team in the world – at least for the next 4 years.

I must admit that I am not an avid soccer fan, but rather a sports fan in general and always cheer for United States teams during international competitions. Congratulations to the USWNT on being the best in their sport.

Being the best when dealing with compressed air products, is what we continually strive for here at EXAIR as well. We are always willing to take the necessary steps to maintain our reputation as the industry leader.

Since we are committed to manufacturing custom solutions, developing new products and do the manufacturing – you can be confident that you have the flexibility and expertise of a company able to improve your unique application.

Don’t be concerned about getting your products on time, we have maintained a 99.9% on-time shipments record for 19 years running. We put our team to work for you everyday. 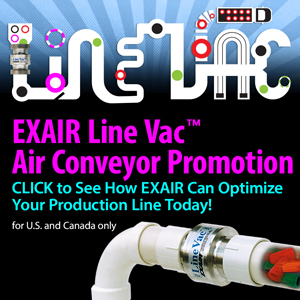