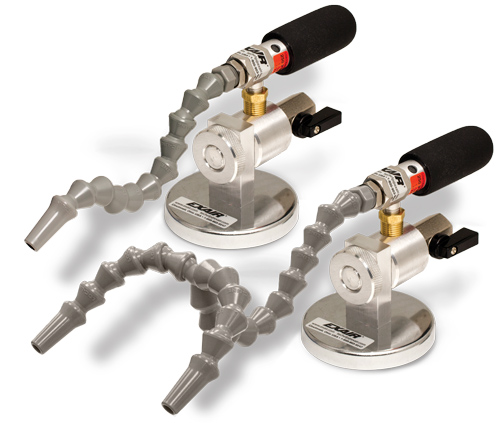 The EXAIR Mini Cooler family is one of the many vortex tube based Spot Cooler products that EXAIR offers.  This is the smallest of the group coming in at 550 BTU/hr of cooling capacity.  The Mini Cooler Systems  are available in two options.

The single point hose kit is ideal for small diameter milling or drilling applications where the cold air can cover the contact area of the cutter.  It can also be used on soldering, industrial sewing, ultrasonic welding, or even small punching applications to list just a few.

When using the Mini Cooler the adjustable cold outlet stays in place and can easily bend around fixtures, spindles, welding horns, or dye aligning pins.  The swivel magnetic base gives additional adjustment at the base of the cooler to aid in the versatility of this product.   To further the adjustability of the cooler the operating pressure can easily be adjusted to lower or raise the cooling capacity of the Mini Cooler to meet the demands of the precise application.

If you believe you have an application that would benefit from the use of a Mini Cooler, or you are unsure which product would be ideal for your application please contact an Application Engineer.  we are all here, willing to help however possible to get your application improved in both safety and efficiency.

I recently worked with an OEM who designed an injection molding machine for their customer. In their design, after the polypropylene parts are formed, they pass through a punch process which creates a scrap piece roughly 1-3/4″ in diameter and 6mm thick but it is very light in weight. The end user was looking for a way to recover these parts in an effort to reduce the amount of waste material in the process but needed an automated solution so they didn’t have to dedicate an operator to manually recover the parts and dump them in the recycle bin. The recovery bin is located close to 25 feet away on the other side of the machining area.

After further discussion,  I recommended they incorporate our Model # 6085 2-1/2″ aluminum Line Vac into their design. The 2.5″ Line Vac has a 2.25″ inside throat diameter which could easily pass the parts and convey them to the collection hopper.

With the recovery bin being located outside of the processing area, they were going to have to run the discharge piping up and over the machines so they were needing something flexible to do so. In addition to the Line Vac, I suggested they use a 30′ section of our 2.5″ conveyance hose. Our conveyance hose is constructed of a durable, clear reinforced PVC, ideal for most general applications and we offer it in 10′ lengths up to 50′, in diameters of 3/8″ to 3″ ID.

When it comes to moving dry material, like small plastic parts or more abrasive materials like steel shot blasting media, the Line Vacs are the perfect, maintenance-free solution as they have no moving parts or motors to wear out. For help selecting the best option to fit your needs or to discuss how another product might be suitable for your application, give us a call.

A stamping facility had a high speed perforating operation. The idea was to punch holes into a matrix at a fast feed rate.  In their operation, they started to see issues with the punched holes, and they also noticed that the punch points were prematurely failing.  With a tight punch-to-matrix clearance, heat was building up from the friction.  This effect was galling the material and affecting the hole appearance and dimensions.  They also noticed heat damage to the punch points.  They either had to slow their process down, or find a way to cool the punch points.  They contacted EXAIR to see if we could help.

To remove heat, you need to have a fluid moving across the material to carry the heat away. For this customer, the fluid would be air.  Just like a hot cup of coffee, you can cool it by blowing across the top of it.  In this instance, EXAIR can blow a lot of air with using very little amount of compressed air.  Because of the gap opening of the tool die was narrow, I suggested the Super Air Knife.  It has a compact design and can blow nicely between the upper and lower die.  With slight modifications, they were able to mount the Super Air Knives right into the base set.  Because the tool die was a “bowl” type design, I suggested that they should use two pieces of the model 110206 Super Air Knife.  They could mount one to each side to make sure to hit all the punch points.  (Reference the picture below).

EXAIR Super Air Knives are the most efficient compressed air knives in the market. It is designed to have a 40:1 amplification ratio.  That means for every one part of compressed air, it will entrain 40 parts of the free ambient air.  As with the coffee reference above, the more air that you can blow, the better the cooling effect.  With the Super Air Knife, we can reach a velocity of 11,800 feet per minute at 80 PSI.  After the customer installed the Super Air Knives, they were able to increase production by 10%.  Also, they found that the punch points were lasting twice as long.  They were so impressed with the effectiveness of the Super Air Knives, they mounted them to all their punch press machines.

If you find that heat is affecting your process, EXAIR could have a product to help you. We have a variety of efficient air movers to cool your parts.  As for this customer above, we were able to increase production and extend the life of their tools.

A stamping company contacted me for help in their ejection blow-off system.  Their operation consisted of a punch press that would form two 8” X 8” triangles from a square piece of metal.  The operation of the punch press was to cut the square piece diagonally at the same time forming the outside edges of the triangle.  At the end of each stroke cycle, the formed parts would then be blown off the die with compressed air.  The blow-off system consisted of two pipes, one that was a ¾” NPT pipe and the other that was a ½” NPT pipe.  They both had the ends of a long nipple flattened to concentrate the air flow.  EXAIR has reduced air use, saved money, and lowered noise levels for many similar applications by replacing open blow-off devices with our engineered air nozzles.

In giving me more details about their operation, the system had a timing sequence that controlled an actuator. When the cycle was complete, the actuator, located below the tabletop of the punch press, would open and send compressed air through both pipes.  The positions of the blow-off pipes were designed to eject one part off the side of the die and the other part off the front of the die into a collection chute.  (Reference the picture below)  They were having issues when their blow-off system wasn’t consistently able to eject the 1 lb. part completely off the die.  In manually having to remove the parts, it would cause an unsafe environment as well as a slowdown in operations.  They found that EXAIR manufactures Intelligent Compressed Air Products and wondered if we could help.

With a lack of restriction at the end of the pipe, the air pressure will drop quickly as it travels through a relatively long length of pipe. The actuator, which was more than 3 feet away from the end of the pipes, had a line pressure of 90 psig (maximum that they could supply).  By the time the compressed air reached the ejection site, the pressure was much lower; thus, not quite removing the part from the die.  An example that I like to use is a garden hose attached to a spigot outside your house.  As you open the spigot, water will flow out of the hose at a slow velocity; not very strong, that is the same as air through an open pipe.  When you place your thumb partially over the end of a garden hose you restrict the flow and increase velocity. Engineered nozzles from EXAIR work the same way.  They restrict the flow at the nozzle, increasing the pressure for a more effective velocity and blow-off force.  Neal Raker wrote a great blog for EXAIR referencing how the nozzles work; called “What’s in a Nozzle?”

I recommended the model HP1125, 2” High Power Flat Super Air Nozzle. It has a 2” wide air stream to allow more contact against the side of the triangle edge.  It has a force of 2.2 lbs. at 80 psig which is more than enough to eject the 1 lb. formed part.  As an added benefit, it only has a noise level of 83 dBA which is magnitudes more quiet than the open pipe.  Also in using the engineered nozzles, they were able to use much less compressed air in their blow-off, saving them over $1,000/year.  If you find that your open pipe blow-off is too loud, not effective, or uses way too much compressed air, you should contact an Application Engineer to see which engineered nozzle would best suit your application.